Releases lets you version and release app changes to your users. By default, all your users will automatically be using the most recent version of your app. However, if you want to lock the version of the app used, you can use the Releases feature. Releases enable you to make changes to your application without affecting your current users.

To create a release, open the Releases modal by clicking on the View releases button from the navigation bar in the top right of the app's editor view. 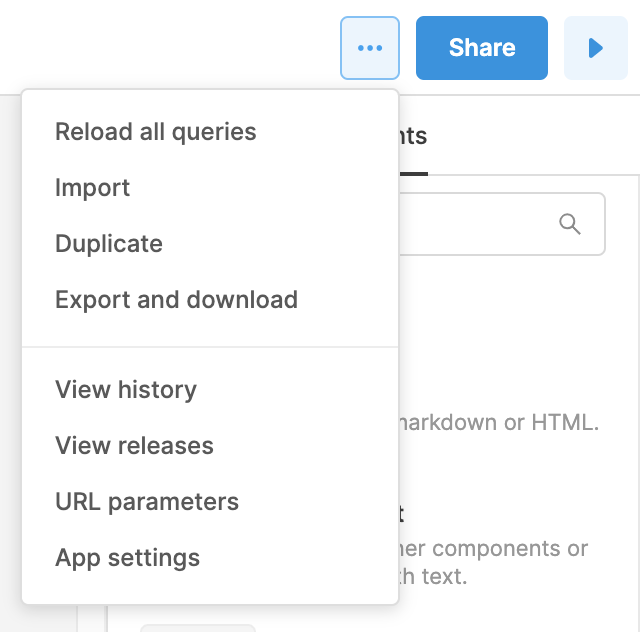 Create a release by selecting a version number, adding a description for the release, and clicking Create.

You can view a list of previously created releases in the bottom part of the UI. To use a pre-existing release, select Publish next to the release you want to use.

When you create a new release, Retool saves the current state of the app and gives it a version number. Each version state is frozen, and can be set as the published version. A published version is the read-only version your users will see.

In the following example, there are 2 release versions (0.1.0, and the live version of the editor). When read-only users visit the page they will see version 0.1.0, since that is the Live published version. 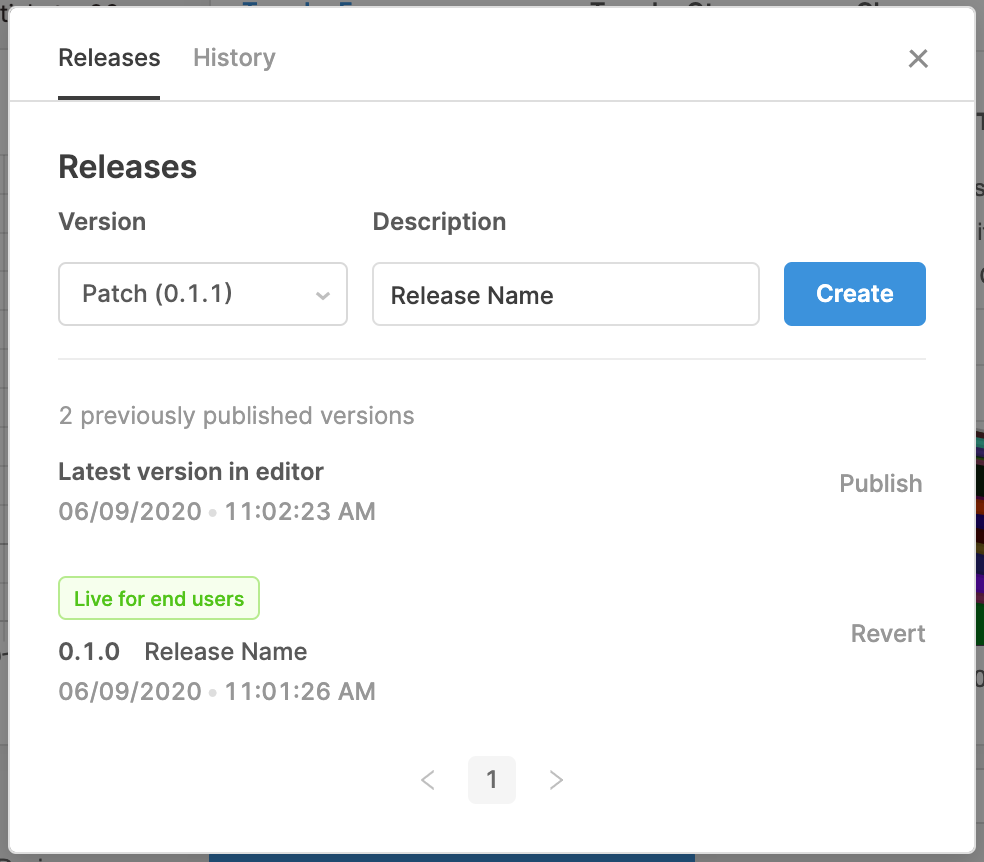 To use the current version of the app, use the latest version. This represents the current state of the page.

If using the latest release version, the page may change as you make page changes. 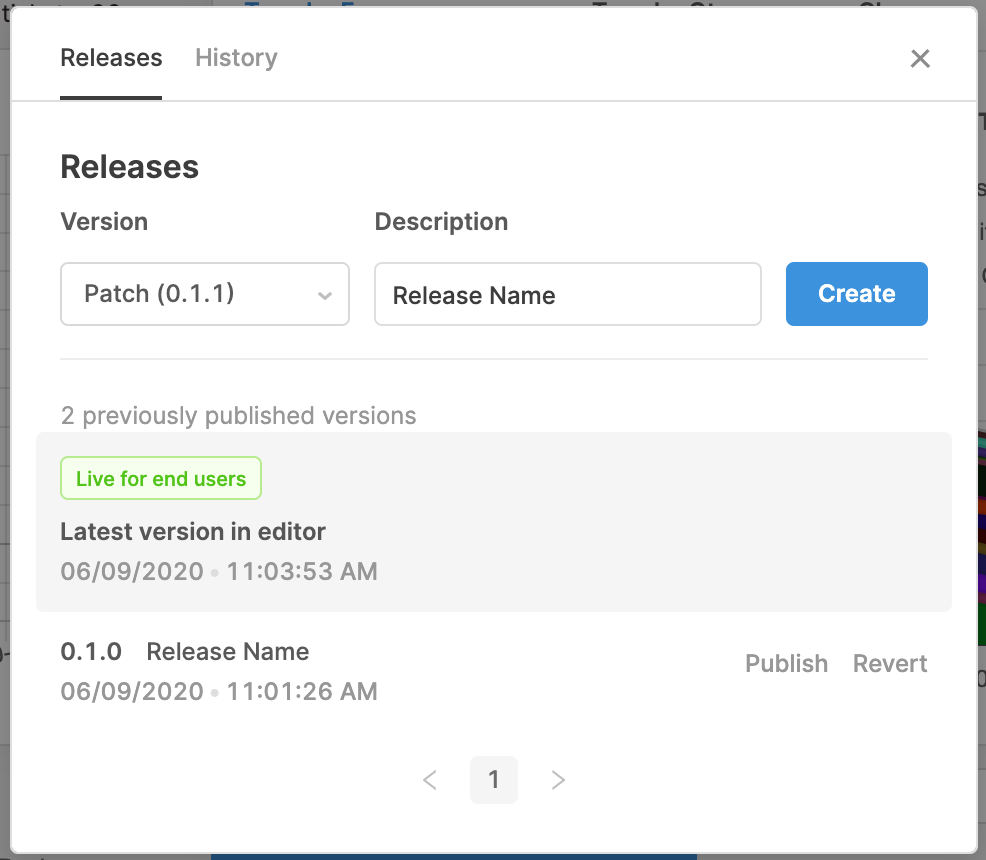 Revert your app to an older release for development

You can revert to an older release, without having to search through your entire history.

Reverting to an older version will not revert their published version, if your end users are not viewing the latest release.

To revert to an older release, click the icon next to the version you want to revert to. 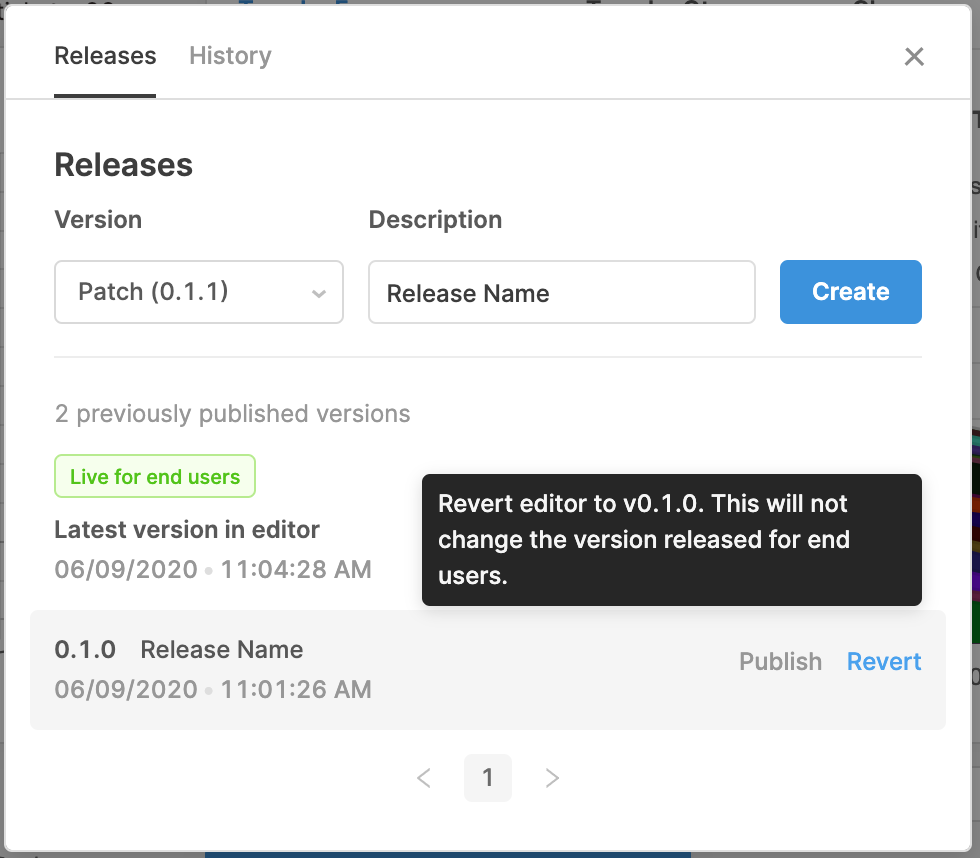 In case you no longer want or need to pin releases of your app for your end users, you can always “unpublish” a release. Un-publishing will result in default behavior of end users being able to always see the most recent version of your app as it changes.

Releases work seamlessly with Protected Apps, but the location of where you can create and manage releases is slightly different.

Since you cannot edit the main or configured default branch of your protected application, to set a release, navigate to the Preview mode of your application. From the header, click the version number to toggle a modal to use the Releases Management modal.

Clicking on “Latest” or version number will open the Releases modal.

If deploying on multiple instances of Retool, it only makes sense to use releases on the instance (usually “production”) where your end users access and use apps.

Depending on the mission-criticality of the app, it can make sense to pin a release so that you can preview or test changes before making them available to end users. Using the Releases feature allows you to deploy apps at the cadence of your choosing, which entail gives you the ability to batch changes and/or manually test for regressions.