Your Retool app isn't worth much if it doesn't get used! This module will walk through different ways to use and share your Retool apps. 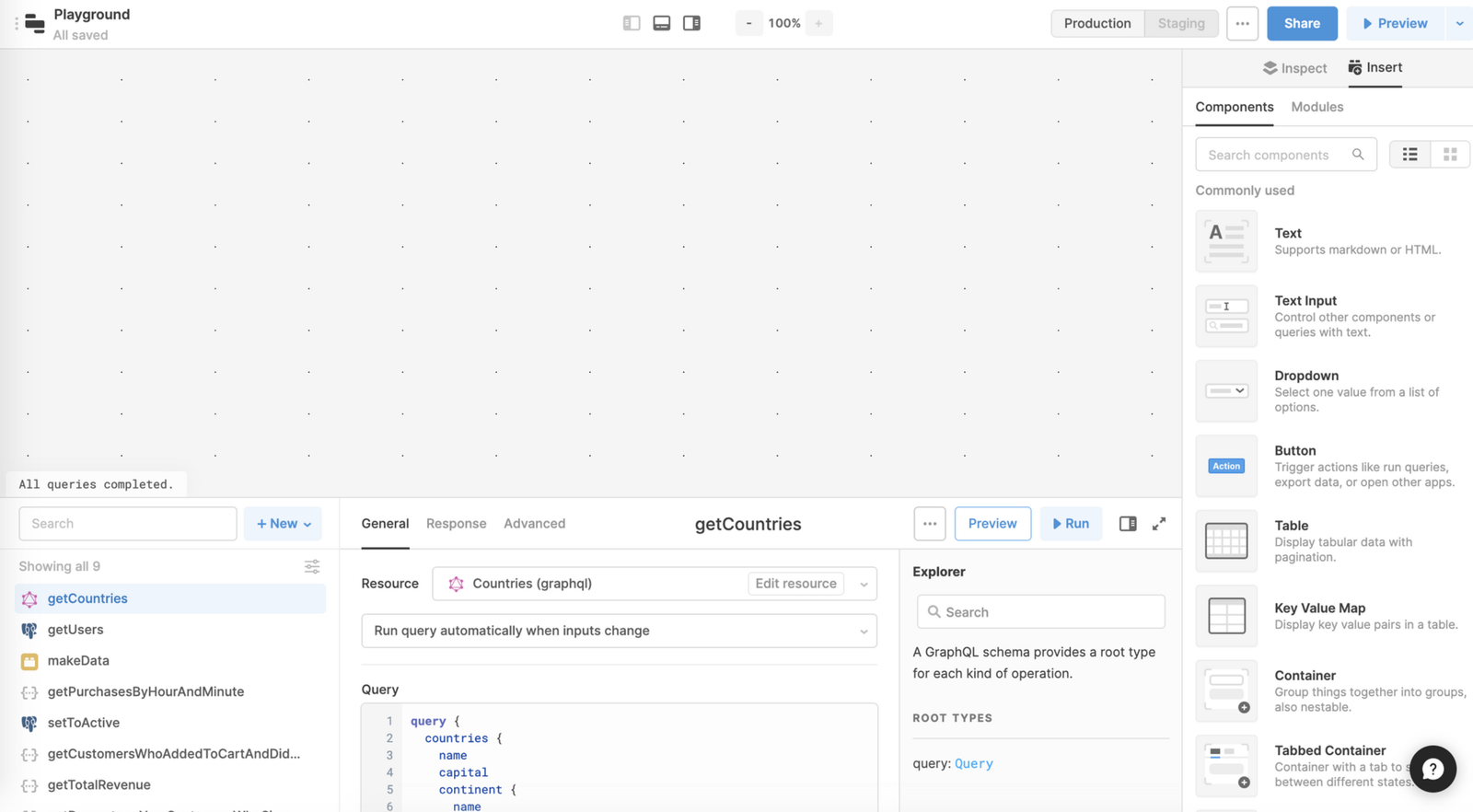 When you click the "Preview" button on the top right in edit mode, your app changes to end user mode.

If you're using releases and versioning in Retool, clicking on the little dropdown arrow will let you select which release to display in end user mode.

Beyond end user mode for users in your organization, you can share Retool apps in a couple of other ways.

You can embed Retool – and the apps you've built in it – in your favorite tools like a web page, or even something like Front. Embedding works through Retool's SDK, and a basic script:

You can read more in depth in our docs here.

You can make your Retool app publicly accessible via a URL without authentication, if you so choose. This is a good fit for public projects, dashboards, and forms, but not for internal apps that deal with sensitive information. And since your public app users aren't authenticated with Retool counts, you're not charged for them using your apps.

You can read more about public apps here.

Public apps are only available on the Business plan.

To learn how to share Retool apps across your organization, see the guide to importing and exporting apps in JSON.

Let’s step back from app-building and talk organizations, users, and permissions for a second.

Retool supports granular permissions across all of your apps. You can organize your organization's Retool users into groups, each group with unique access levels to individual applications and data sources, along with splits between admin, editor, and viewer levels. See the User permissions documentation for more information.

User-level permissions are only available on Business and Enterprise plans. All accounts on Free and Team plans have global Edit access by default and group attributes cannot be modified.

Anyone with a Retool account counts as a user pricing-wise, editor or otherwise. On the Business and Enterprise plans, you do get the public apps feature, which lets you build unauthenticated apps that are publicly available to anyone with the URL. Whoever uses that link won't need a Retool account, so you won't be charged for them. Since the app is completely public though, you wouldn't want it to have any user-specific information or dangerous functionality (I.E. deleting rows in a database).

The current solution is to write into support with permission from the user to have us archive the user’s account, then re-invite them. Users can’t carry their resource setups to new orgs, but can export their old org’s apps for import into their new org.

Archiving a user removes their account from Retool’s list of active accounts, and allows the user to be invited to another org. Disabling a user, which can be done by admins in Settings > Users, simply removes their access to your org.