We strongly recommend you point your Dockerfile to the full X.Y.Z version rather than a Docker tag name. This ensures that the version of Self-hosted Retool remains fixed in the event you need to roll back or troubleshoot issues with your deployment, or maintain multi-instance deployments.

Retool performs database migrations during each update of Self-hosted Retool. Downgrading to a previous version can cause unpredictable issues.

As you consider updating your Self-hosted Retool deployment, ensure you choose a newer version. You can identify your current version of Self-hosted Retool by logging in and clicking on the Help menu in the lower-right of the Organization dashboard. 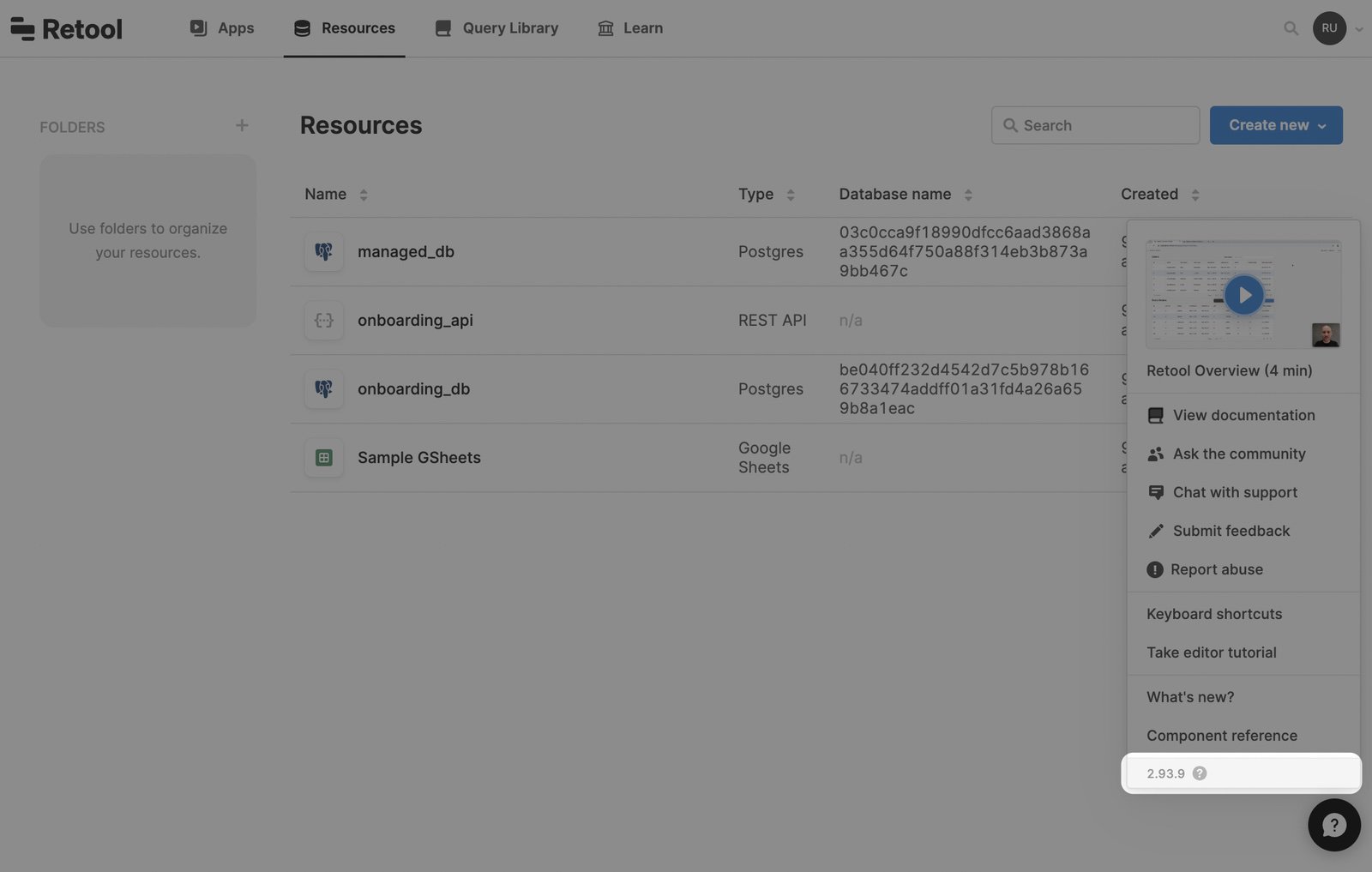 The following release notes detail the changes and updates for each version of Self-hosted Retool. Refer to Retool's Changelog for more information about new products and features.

In v2.95, Retool upgraded the Node.js version it uses which may require you to set the POSTGRES_SSL_REJECT_UNAUTHORIZED environment variable. If your main PostgreSQL database uses self-signed certificates, you need to set this variable. It defaults to true but can be set to false to prevent errors related to self-signed certificates in the certificate chain.
Note: The default value for POSTGRES_SSL_REJECT_UNAUTHORIZED was changed to false in 2.95.8 to preserve pre-2.95 behavior.

Versions 2.86.12 and 2.86.13 included a regression which broke new and existing Postgres resources that connect using SSL. Please upgrade to 2.86.14 if you are experiencing these issues. Git Syncing (with Github) is failing on versions before v2.86 due to a change in SSH encryption requirements on GitHub. Please upgrade to v2.86.14 or above to fix broken Git Syncing functionality. No other SCM providers (Gitlab, Bitbucket, etc.) are affected.

We published v2.68.17 as a stable release on June 1st, 2021. However, we found a bug with Redis connections not being closed properly, which was fixed in the next version. We recommend upgrading directly to 2.68.18 instead.

We published 2.67.13 as a stable release on May 17th, 2021, but detected a bug with Git Syncing for read-only instances in certain Cloud-hosted environments. We recommend upgrading directly to 2.67.14 instead.