A module is a reusable group of components and queries. You might use a module to reuse common components in multiple apps or split up common functionality into smaller parts. For example, you can use modules to:

You can create a module from scratch, by cloning a module from an app, or by copying components to a module. Once you've created your module, you can define it further with inputs and outputs.

To create a module, on your home page, select Create new > Module and give it a unique name. You can change the name any time in the App editor. 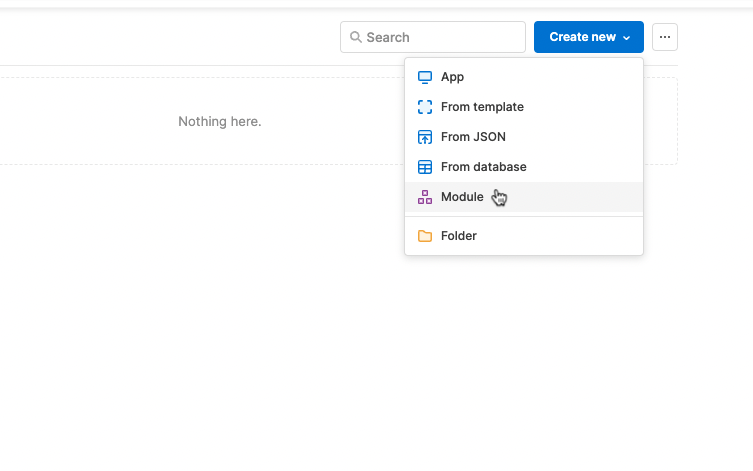 After creating a module, assemble components using the same methods you would use to build an app.

Clone an app to a module

Cloning an app to a module copies the app's components and queries to the new module, leaving the app unchanged. To clone an app from an existing module, click on the App actions menu and select Clone to module. 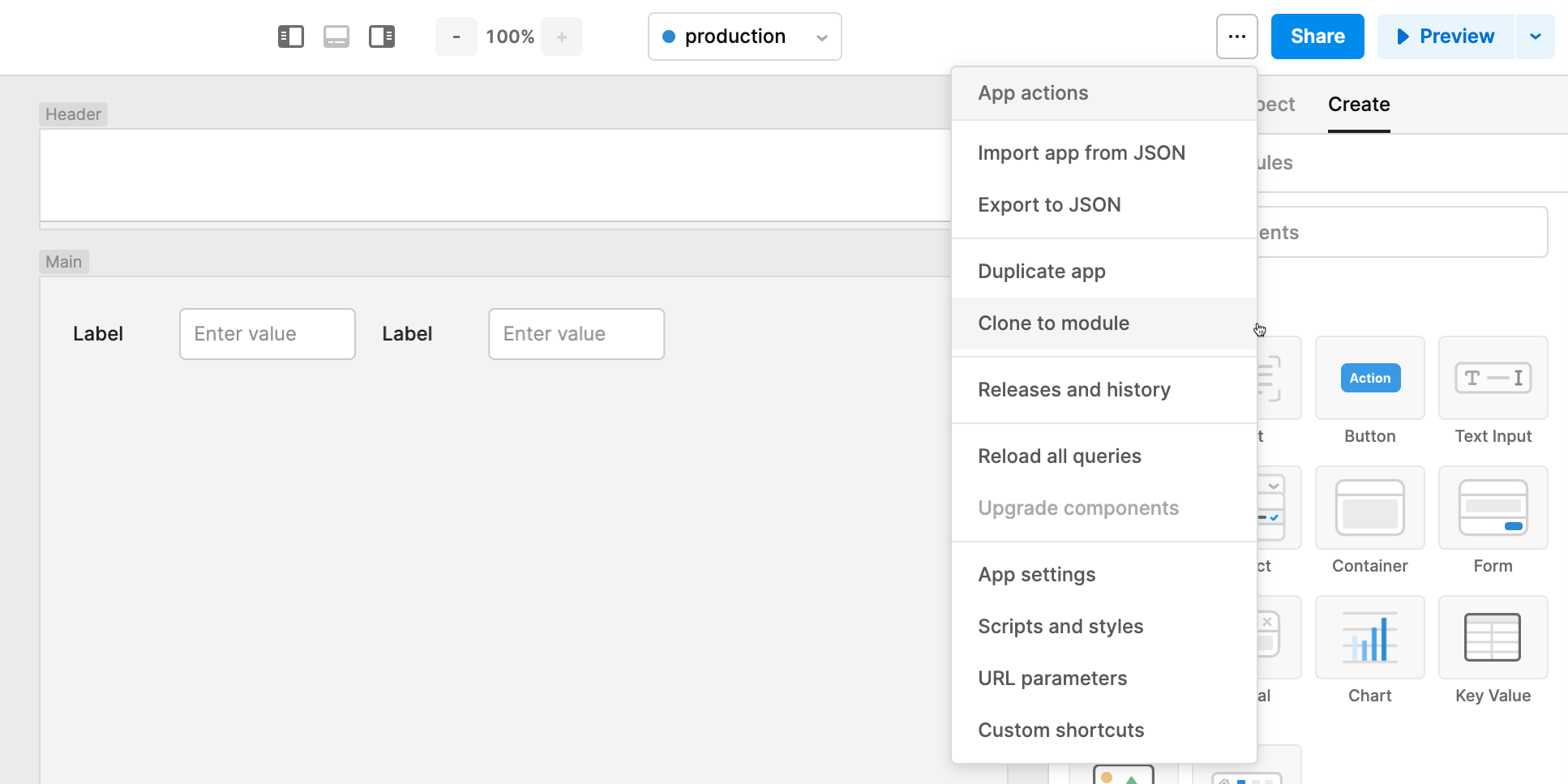 Copy components to a module

Inputs are data or queries that can be passed into your modules from apps or other modules. Modules inputs are a separate concept from component inputs and can be either a data input or a query input.

A data input is a property—a string, object, number, or boolean—that apps can pass into your module.

To add a data input:

In the following example, filterType and filterOptions are data inputs used to populate the Select component.

Query inputs allow you to pass in and trigger queries from existing apps. For example, you might want to use a query input to pass in different queries based on the parent app, helping your module's reusability.

To add a query input:

Though query inputs are not defined in modules, you can view them in the query editor and add [event handlers] to them. 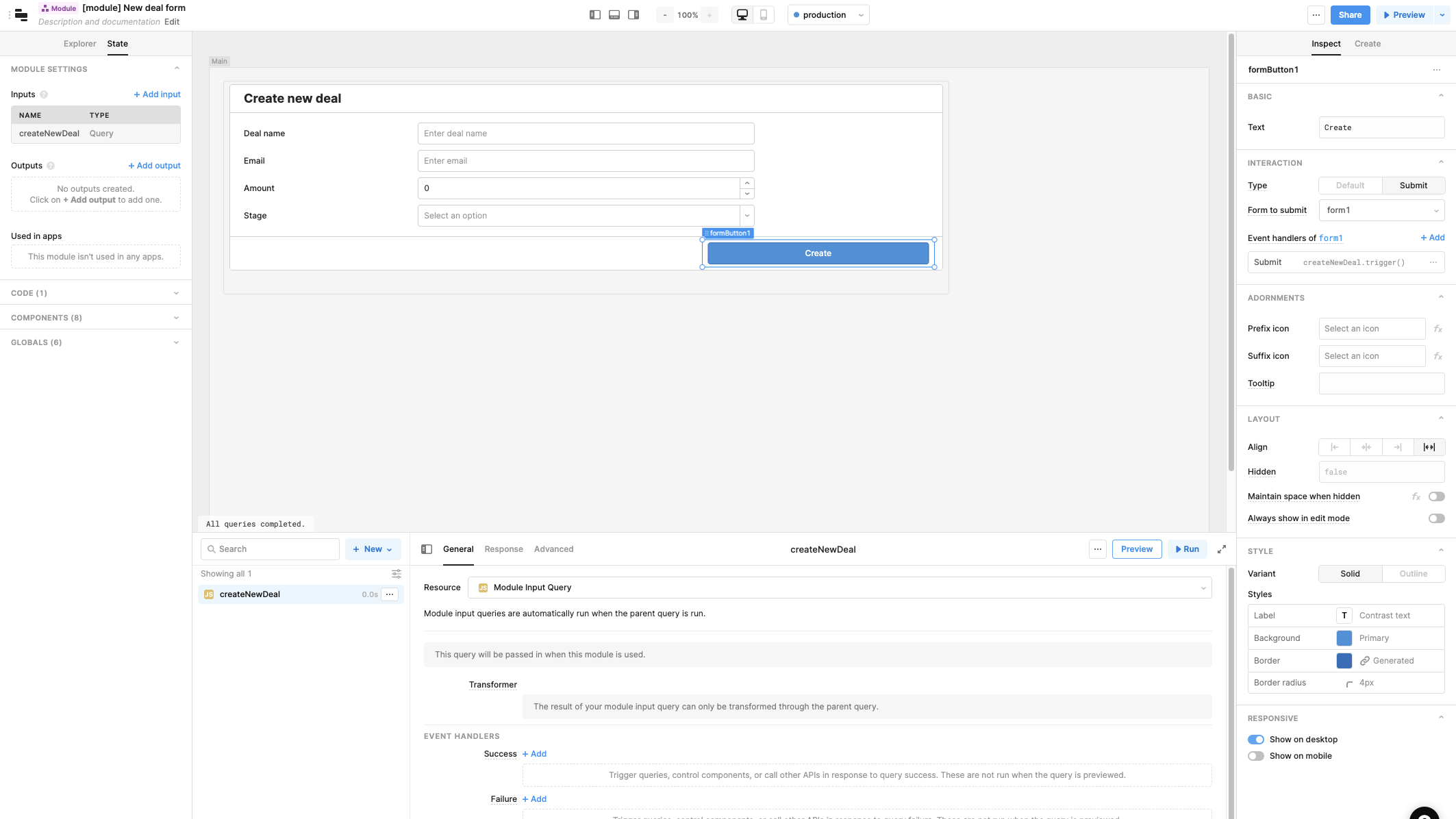 Modules are designed to be imported in any app where they're passed the proper inputs. However, if you need to trigger a query inside a module based on actions in the app using the module, you can find instructions in our community forum.

Because module inputs are controlled by the app using a module, to preview your module you may want to pass through test values. When you select the module container, the right panel of the App editor shows a Test inputs section. There, you can test your module's behavior given expected values for each of your inputs.

To add an output:

In apps which use your module, you can refer to outputs using the naming convention {{ moduleName.outputName }}. In the parent app, you can confirm this value by viewing the module in the State > Components section, where you should see the output within the module object.

Use modules with apps and other modules

Modules can be used and imported into apps and other modules, exported to JSON, and exported as apps.

Add modules to apps and other modules

To add a module to your app or module:

Import and export modules in JSON

You can also import a module from your home page by selecting Create new > From JSON.

You can set default dimensions of your module by resizing the blue container in the App editor. Components within this container automatically resize the same as they resize in apps, including dynamically based on their contents using the Hug Contents option in the Inspect tab.

Users who can view an app can view any modules used in that app. Users must have write access to a module to edit it, even if the user has edit access to an app using the module.

Users who can edit a module can add the module to apps.

Apps always use the latest version of any contained modules.

To revert a module to a previous state, go to Module actions > Release and history > History and select Revert next to the state to restore. This updates the module in all apps using the module.

Did this page help you?